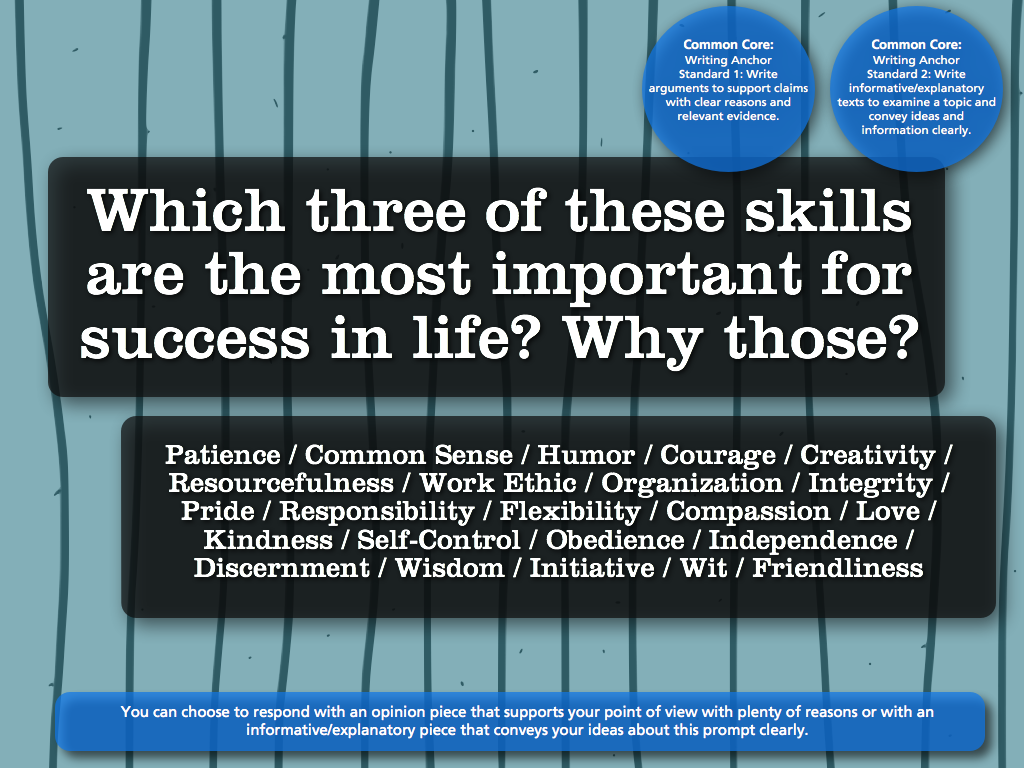 I even spend my free time doing nonograms, grid-based logic puzzles solved by using clues to fill in seemingly random pixels to create a picture. It started when I was a kid. One day, my dad captured my fickle kindergartner attention a herculean feat and taught me Sudoku.

As he explained the rules, those mysterious scaffoldings of numbers I often saw on his computer screen transformed into complex structures of logic built by careful strategy. From then on, I wondered if I could uncover the hidden order behind other things in my life. In elementary school, I began to recognize patterns in the world around me: thin, dark clouds signaled rain, the moon changed shape every week, and the best snacks were the first to go. I wanted to know what unseen rules affected these things and how they worked. My parents, both pipeline engineers, encouraged this inquisitiveness and sometimes tried explaining to me how they solved puzzles in their own work.

Essay on Common Core State Standards and Its Impact on Curriculum

In high school, I studied by linking concepts across subjects as if my coursework was another puzzle to solve. PEMDAS helped me understand appositive phrases, and the catalysts for revolutions resembled chemical isotopes, nominally different with the same properties. As I grew older, my interests expanded to include the delicate systems of biology, the complexity of animation, and the nuances of language. I was and remain voracious for the new and unusual, spending hours entrenched in Wikipedia articles on obscure topics, i. Unsurprisingly, like pilot fish to their sharks, my career aspirations followed my varied passions: one day I wanted to be an illustrator, the next a biochemist, then a stand-up comedian.

When it came to narrowing down the choices, narrowing down myself, I felt like nothing would satisfy my ever-fluctuating intellectual appetite. But when I discovered programming, something seemed to settle. In computer science, I had found a field where I could be creative, explore a different type of language, and yes solve puzzles. Even when lines of red error messages fill my console, debugging offered me the same thrill as a particularly good puzzle.

While to others my life may seem like a jumble of incompatible fragments, like a jigsaw puzzle, each piece connects to become something more. However, there are still missing pieces at the periphery: experiences to have, knowledge to gain, bad jokes to tell. Someday I hope to solve the unsolvable. Growing up, my world was basketball. My summers were spent between the two solid black lines. My skin was consistently tan in splotches and ridden with random scratches. My wardrobe consisted mainly of track shorts, Nike shoes, and tournament t-shirts. Gatorade and Fun Dip were my pre-game snacks.

The cacophony of rowdy crowds, ref whistles, squeaky shoes, and scoreboard buzzers was a familiar sound. Hidden in the cracks of a blossoming collegiate level athlete was a literary fiend. I devoured books in the daylight. I crafted stories at night time. After games, after practice, after conditioning I found nooks of solitude. Within these moments, I became engulfed in a world of my own creation.

Initially, I only read young adult literature, but I grew to enjoy literary fiction and self-help: Kafka, Dostoevsky, Branden, Csikszentmihalyi. I wrote my first novel in fifth grade, my second in seventh grade, and started my third in ninth grade.

Standards in this strand:

Reading was instinctual. Writing was impulsive. I stumbled upon the movies of Hayao Miyazaki at a young age. I related a lot to the underlying East Asian philosophy present in his movies. My own perspective on life, growth, and change was echoed in his storytelling. Then, I discovered the books of Haruki Murakami whom I now emulate in order to improve my writing. Like two sides of a coin, I lived in two worlds.

One world was outward—aggressive, noisy, invigorating; the other, internal—tempestuous, serene, nuanced. Internal and external conflict ensued. Many times I was seen only as an athlete and judged by the stereotypes that come with it: self-centered, unintelligent, listens to rap. But off the court, I was more reflective, empathetic and I listened to music like Florence and the Machine. But why should I be one-dimensional? I had always been motivated to reach the pinnacle of my potential in whatever I was interested in. Why should I be defined by only one aspect of my life? I felt like I had to pick one world.

Then I had an ACL injury. And then another. After the first ACL surgery, my family and I made the decision to homeschool. I knew I wanted to explore my many interests—literature, novel writing, East Asian culture, and basketball—equally. So I did. I found time to analyze Heart of Darkness and used my blog to instruct adult authors how to become self-published authors. I researched Shintoism, read dozens of books on writing and self-improvement.

My sister and I had been talking for a while about starting a nonprofit focused on social awareness, education, and community outreach. Finally, we had the time to do it. While basketball has equipped me with leadership skills and life experiences, it is only one part of who I am. As a socially aware, intellectual, and introspective individual, I value creative expression and independence. When I was a little girl, I imagined I had superpowers.

Deadly lasers would shoot from my eyes pulverizing the monsters hiding under my bed. Mom would wonder where I had magically disappeared to after I turned invisible as she forced me to eat that plate of broccoli. It was the wish I made on every birthday candle and upon every bright star. I discovered my first power when I turned My mom had been diagnosed with Ovarian cancer my freshman year of high school.

Seated alone in my room, I became lost in a cycle of worry and panic.

In the midst of my downward spiral, I reached out for a small bristled paintbrush, guiding it across the canvas--the motion gave me peace. My emotions spilled out onto the canvas, staining my clothes with a palette of blues and blacks. A sense of calm replaced the anxiety and fear which had gripped me tightly for so many months. Painting gave me the power to heal myself and find peace in a scary situation. Little did I know, sharing my superpower would lead me to unfamiliar parts of my city.


From paper masks in October to pots of sunshine crafts in March, it did more than teach students to freely draw and color; it created a community where kids connected with the power of art to express joy, hope, and identity. The program, now in its third year, has succeeded in reaching kids deprived of art.

Sharing art with these students has given me the power to step outside of my familiar surroundings and connect with kids I never would have met otherwise. I am grateful for the power of art to not only heal but to also connect with others. I knew my powers worked on a local level but I wanted to reach out globally.

For four years, I have been searching for a way to defeat the scourge of child marriage, a leading cause of poverty in rural India.

I took my powers overseas, flying 8, miles to arrive at a dilapidated school in the bleak slums of Jaipur, India. While conducting interviews with pre-adolescent girls stuffed into dusty classrooms, I learned of their grey routines: rising early to obtain well-water, cooking, cleaning and caring for younger siblings prior to rushing to school. Despite the efforts of keeping these girls in school to prevent child marriage, their school relied on rote memorization without any creative arts programming.

As I organized my art project for these girls, I was unsure if my powers would reach them. Their initial skepticism and uncertainty slowly transformed into wonder and joy as they brought their bright paper fish cut-outs to life.

The experience opened my eyes to the power of art to form universal connections, and it inspires me to share and strengthen its force within the lives of all children. Much of the little girl yearning for superpowers remains a part of me. But now I have moved beyond wishing for powers to acquiring a deeper understanding of how superpowers work. While I never fulfilled my wish to run at lightning speeds or shoot spiderwebs from my fingers, my experiences with art have taught me that the greatest superpowers lie within each of us -- the powers to create, express, and connect in meaningful ways.

Every girl deserves the chance to dream, I am just lucky mine came true. Does every life matter?